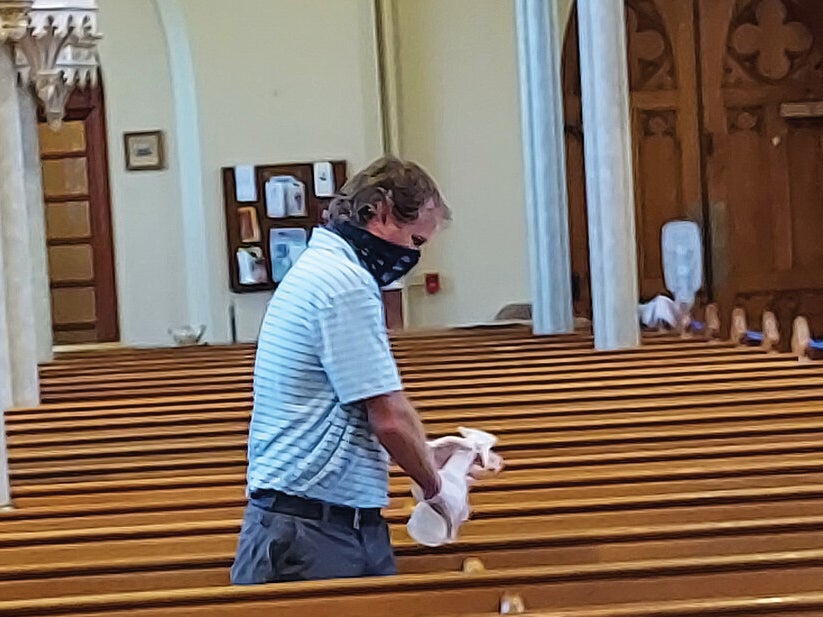 If someone would have told Russ and Terri Rohrer back in January that they would have been running a new ministry of volunteers who clean after each Mass, they never would have believed it. But the COVID-19 pandemic has changed a lot of things, including the increased need to keep St. Francis Solanus clean and sanitized. When churches were ordered to be closed in March, Russ and Terri realized how much they missed receiving the Eucharist. They certainly appreciated the option to watch the online streamed Masses, even though it wasn’t quite the same as being there in person.

They also found they missed being around their fellow St. Francis Solanus parishioners. When they heard churches were set to reopen on the weekend of June 6-7, Russ and Terri knew there was important work to be done to keep the worship space, entry, doors and bathrooms clean. Russ and Terri also knew how badly people missed attending Mass. So, they wanted to do whatever it would take to keep everything clean and help parishioners feel comfortable attending Mass. They both jumped in and told Fr. Don Blaeser they wanted to begin organizing a group to clean after each weekend Mass.

“When Russ and I talked about it, we both had no hesitations that God was calling us to lead this ministry,” Terri says.

Russ previously owned the local Stanley Steemer franchise, and he has worked for ServiceMaster. Currently, he runs a home for developmentally challenged adults through Transitions of Western Illinois. Terri has done some cleaning part-time. Both Russ and Terri are conscious of cleanliness and the importance of getting it perfect. Their daughter, Katie Schuecking, also helps out.

“We were afraid that if people didn’t have a clean and safe place to come, they wouldn’t come back,” Terri says.

Currently, Terri organizes a group of about eight people to clean after each Mass. With a group that size, the cleaning takes between 15 to 20 minutes. Terri hopes to have enough volunteers so that each person helps every other weekend at most. She has some people who volunteer to help, without being called in advance.

“One week, I even ran out of rags,” she says. “This is a great way to model stewardship to kids. This is something they can grab a rag and help with.”

For Russ and Terri, getting involved in the Church was always modeled to them. They are thankful to have this opportunity to serve our parish and model stewardship to their fellow parishioners. Although she is still amazed that she took on the task of leading a cleaning ministry, Terri is more than happy to serve in this way.

“This is very important work, and we take it seriously,” Terri says. “We want people to feel safe coming to church.”

If you would like to help with this important ministry of cleaning after weekend Masses, please call or email Terri Rohrer at 217-617-7778 or [email protected]